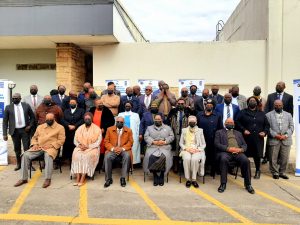 Members of Senate were on Monday 4 July 2022 sensitised on the 11th Constitutional Amendment Bill, popularly known as the Omnibus Bill at a three-day workshop. The intent of the sensitisation workshop was to brief the senators about the proposed amendments to the constitution as recommended in the multi-stakeholder national dialogue Plenary II Report. The sensitisation workshop was intended to open discussion among senators on the Bill. The workshop was further intended to create a platform for sharing common ground on the proposed amendments to the constitution.

In her remarks at the workshop, the Head of Delegation of the European Commission to Lesotho, Her Excellency Paola Amadei challenged Senators and Members of Parliament to remember their responsibility of debating and adopting the changes to the constitution that have been drafted by the National Reforms Authority over the last two years.

She emphasised that the passing of the Omnibus Bill was a crucial step in advancing the National Reforms Process, which she said allows its implementation after a process that stretched over many years and saw the involvement of the whole nation.

“The reforms are a promise for a better future. More political stability, transparency and accountability of governance are all positive outcomes of the National Reforms Process.” She said.

Ambassador Amadei intimated that the United Nations Development Programme (UNDP) and the European Union (EU) have continued to support the Lesotho national reforms, providing political and financial support. She indicated that the two partners’ support has been provided to facilitate public meetings during the dialogue process and to fund former NRA in its work of legal drafting and outreach.

Ambassador Amadei expressed a grave concern that Parliament might fail to adopt the proposed changes to the Lesotho Constitution before the dissolution of both the Senate and the National Assembly.

“Lesotho is now at a point where failure of approval will not simply mean a further delay but potentially an end of the process without anything or little to show, said the Ambassador.

She therefore noted that the reform process shall represent the legacy of the 10th Parliament and the incumbent Executive. She feared that relegation of adoption of the reforms to the next Government and lawmakers would have serious implications  as the country would face a new legislative period with rules that proved to be inadequate in the past and that exposed the country to instability and violence.’

She said: “After the dissolution of the Parliament and the General Election, it is not clear if and when a new Government will take over and will focus on the National Reforms Process”.

Even when adopted their implementation would be rolled over and be effective only under a new mandate. Citizens have been impatient to see the implementation of the reforms.”

“As lawmakers, I urge you to deliver on the oath that you gave to serve these citizens.” She intimated.

In the same vein, UN Resident Coordinator, Her Excellency Amanda Mukwashi commended Lesotho for the fact that successive Governments since the aftermath of the unfortunate events of 2014 have remained faithful and focused on the reforms.

She said that the government’s attitude of being committed to the reforms has inspired Basotho and gave confidence to the international community that it was keen to lead the transformation of the Kingdom of Lesotho.

Her Excellency Mukwashi applauded the Cabinet’s decision to establish a Transitional Office on Reforms within the Ministry of Law and Justice as an interim measure to sustain the reforms process.

She affirmed the UN’s resolve to continually support the reforms journey, noting: “The UN encourages the Government to remain steadfast in the push towards a legislative framework for implementation of the reforms enunciated in the 11th Constitutional Amendment Bill.”

Commenting on the pre-eminence of the sensitisation workshop, UN Resident Coordinator  said: “ This workshop is taking place at the right time and its importance cannot be understated, because the Senate as the Upper House shall have the final say on this Bill, hence the need to have Senators get deep inside on what is contained in the document ahead of debate.”

She said: “Senators will have the opportunity to interact with the document facilitated by experts and members who drafted it. It is an opportunity to gain clarity and answer questions on the Bill in order to make meaningful contributions during the formal debate.”

Meanwhile, the Minister of Justice and Law, Hon. Lekhetho Rakuoane noted that reforms are universally accepted as a platform for embracing a transformational attitude and aptitude towards development in all spheres or selected spheres of a society.

He indicated that reforms create a grand platform for citizens to embrace a new mindset towards development. He said: “They denote developing strategies for an agreed modality for correcting past wrongs for the benefit of development.”

“A reform further places a major responsibility over the leadership of a country to rally the rest of society towards a new way of thinking about their country,” the Hon. Minister said.

Senators expressed concern about the manner the process of engaging them on the Bill unfolded, saying they were not taken seriously. They feared that the government was treating them unfairly as they had not been furnished with the Bill well ahead.

The former Chief Executive Officer of the NRA, Advocate Mafiroane Motanyane presented an overview of the national reforms in line with the recommendations of Plenary II Report.

Advocate Motanyane outlined the proposed amendments to the constitution and those that are still pending. He reminded Senators about the painstaking and not so impressive political trajectory that Lesotho has traversed since independence.

Thereafter, the former chairpersons of technical committees of the thematic areas of reform at NRA made presentations on the proposed constitutional amendments in their specific areas, which, they led when they were with the Authority.

The sensitisation continues for the next two days and ends on Wednesday, 06 July 2022.